How old are my tyres? 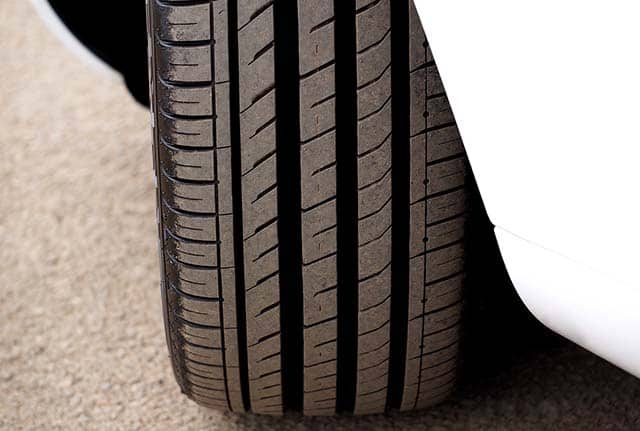 A problem that’s often overlooked with tyres is their age. If you drive less than the UK average of 8,000 miles a year, your tyres may well become unsafe through ageing before they ever wear out. Tyres left on the rear of a front wheel drive car are more likely to encounter this problem. Doing just 5,000 miles per year it could take up to ten years to wear the rear tyres out.

We are unaware of any technical data that supports a specific tyre age for removal from service. However members of the tyre and automotive industries recommend that all tyres (including spare tyres) that were manufactured more than ten (10) years previous be replaced with new tyres, even when tyres appear to be usable from their external appearance and if the tread depth may have not reached the minimum wear out depth.

Vehicle manufacturers may recommend a different chronological age at which a tyre should be replaced based on their understanding of the specific vehicle application; you should follow any such instruction.

Consumers should note that most tyres would have to be removed for tread wearout or other causes before tyre age is a problem. Any statement on removal period in no way reduces the consumer’s responsibility to replace tyres as needed.

The chronological age of the tyres

The chronological age of any tyre can be found on the tyre sidewall by examining the characters following the symbol “DOT”.

For tyres manufactured prior to the year 2000, three numbers instead of four indicate the date of manufacture.

Also, during the early 1990’s, Continental added a triangle (◄) to the end of the character string to distinguish a tyre built in the 1990’s from previous decades.

If in doubt, please consult your local tyre dealer.